Faculty of Law of the UWI, Mona Campus Receives Donation of Books from IMPACT Justice

The Canadian government-funded Improved Access to Justice in the Caribbean (IMPACT Justice) project has donated 948 law books to the Faculty of Law of the UWI, Mona Campus, Jamaica.

The official handing over ceremony for these books took place on September 8, 2016, in the Faculty Executive Seminar Room, Faculty of Law, UWI, Mona Campus.

His Excellency Sylvain Fabi, High Commissioner of Canada to Jamaica, delivered remarks. He spoke about the important role law libraries play in the education of the legal profession and in being the repositories of information for all legal researchers.

Professor Velma Newton, Regional Project Director of the IMPACT Justice also delivered remarks. She noted that one of the major deficiencies in the justice sector in CARICOM Member States is a shortage of legal materials both on the Caribbean and elsewhere. She highlighted the Law Library of the UWI Cave Hill Campus as one regional library that is in better shape than others.

Prof. Newton told the audience that in designing the project component on access to legal information, she was very mindful that both law library staff and collections were in dire need of assistance. She suggested that the collections of existing University libraries be strengthened only in libraries where the investment would be well organised and maintained, and members of all branches of the legal profession and the public would have access. 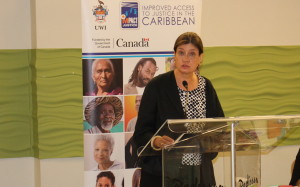 Included in the texts donated are books on gender equality, human rights and the environment, which are project crosscutting themes and on topics for which research is being done for the project.