IMPACT Justice donates 244 books to the University of Guyana Library

The Canadian government-funded, Improved Access to Justice in the Caribbean (IMPACT Justice) Project has donated 244 books (192 titles) to the University of Guyana Library as part of its efforts to improve the provision of legal information in Caribbean Community (CARICOM) Member States. 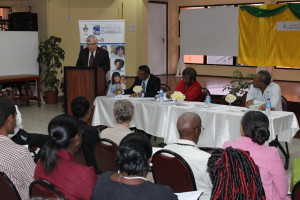 His Excellency Pierre Girous, High Commissioner of Canada to Guyana, Ambassador of Canada to Suriname and Canadian representative to CARICOM

His Excellency Pierre Giroux, High Commissioner of Canada to Guyana, Ambassador of Canada to Suriname and Canadian representative to CARICOM delivered remarks on behalf of the Government of Canada and lauded the initiative.

The books were formally received by Vice-Chancellor of the University of Guyana, Prof. Ivelaw Griffith, who expressed gratitude on behalf of the University to the Government of Canada and the IMPACT Justice Project for the hearty contribution.

He revealed that a sum of approximately GYD$33 million was invested in the 244 law books, stating that the University of Guyana will place much value on this genuine contribution.

The texts include books on gender equality, human rights and the environment, which are project crosscutting themes and on topics for which research is being done for the Project.