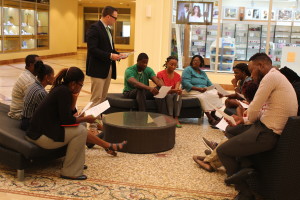 The training, which took place from March 29th – April 2nd,  fell under the project’s Alternative Dispute Resolution component, the goal of which is to promote the use of alternative means of settling disputes in an effort to reduce the number of cases reaching the courts.

The workshop was well-received by the participants who rated the training very highly. Many of them stated that they were encouraged to use mediation not only as part of their jobs, but in their daily lives.