The Programme, which was first launched as a pilot at the Parkinson Memorial Secondary School, Barbados is designed to increase the capacity of students to settle disputes without resorting to violence or disruptive behaviours.

At the programme launch, Professor Velma Newton, Regional Project Director of the IMPACT Justice Project informed those gathered of the many improvements seen in the students after their involvement in the pilot programme. Some of the changes noted were improvements in deportment, increased confidence and improved academics.   She also noted that because of the positive results and feedback both from students, the facilitators and teachers, IMPACT Justice decided to take the Project to another island. 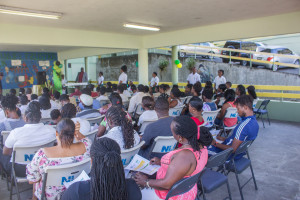 She stated, that having identified the Dr. J. P. Eustace Memorial School, IMPACT Justice, with the approval and support of the Ministry of Education, the Principal, Mrs. S. Cupid Ferdinand, the Deputy Principal, Mr. Cruickshank and IMPACT Justice consultant, Allan Burnett, organized the programme which will benefit 26 students (13 boy and 13 girls) over the next 8 weeks.

Professor Newton expressed her thanks to the school, the students, the Ministry of Education and the programme facilitators for their support and urged the students to take from the programme good principles which will influence them in their future endeavours. Mr. Chesley Ferdinand, Education Officer (Counselling), Ministry Of Education, National Reconciliation and Information and Mrs. S. Cupid Ferdinand, Principal of the also delivered addresses.