In the presence of their parents, teachers and peers, the students of the Triple H Programme were praised for their participation and dedication to the 11 week programme which required them to stay after school two days a week for sessions. Principal Holder, in his opening remarks noted that since the introduction of the programme he has seen a significant change in many of the participants in terms of their social development and interaction with others. He noted also that the Triple H Programme is a pilot that the Parkinson Memorial Secondary School could be very proud of and which he would like to see continue for years to come.

Ms. Patricia Warner, speaking on behalf of the Ministry of Education noted also that she was very pleased by the success of the programme and urged the parents and teachers to continue to support the children as they moved forward.

Professor Velma Newton, Regional Project Director of the IMPACT Justice Project, also addressed the gathering and gave a recap of the components of the Triple H Programme which included sessions on: 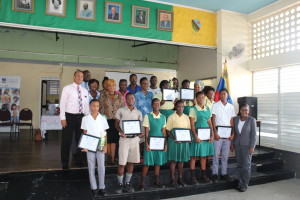 Graduates of the Triple H Programme with their parents, facilitators and representatives of the IMPACT Justice Project and the Ministry of Education

She too was very pleased with the success of the programme and thanked all of the facilitators for giving of their time to work with the students and also thanked the students for their participation.
Latest News, Uncategorized
Impact User
No comments
1001
0
0
anger managements, Community peace building, heal, help, hope, Parkinson Memorial, violence in schools, youth development